I moved to Jackson for the summer of 2007. Little did I know, I would be there for much longer than one summer. I grew up in Covington, Georgia, and went to the University of Georgia for my undergraduate degree. After graduation, I accepted a job in Atlanta to start in the fall. Before starting my career, I moved to Jackson to work on a dude ranch as a wrangler. It was then that I fell in love with the Tetons and Jackson. I tossed aside the corporate world for a future of fun and adventure. I lived in Jackson from 2007 to 2012, with a year off in Nashville, Tennessee. Jackson allowed me to explore my love for music and develop my career as a singer-songwriter.

Jeff grew up in Rock Hill, South Carolina. He was a student at Clemson University when he decided to take a break and explore the West. In 2009, he moved to Jackson for the winter season. He, too, fell for the lifestyle and freedom Jackson offered. Who knew that by taking the time to explore our passions and enjoy the beauty and nature that Jackson offered, we would be taking steps to finding each other?

I had just moved back to Jackson after spending a year in Nashville. I was out for a night of bluegrass at the Town Square Tavern when I met up with a friend who had recently moved to Jackson from Nashville. He was out with his roommates, one of whom was Jeff. We were introduced, surrounded by some of our best friends and great bluegrass music. Over the next few months, through endless games of shuffleboard, ski dates, and swinging around the dance floor, Jeff won me over with his smile, humor, and sense of adventure.

In 2012, Jeff moved back to South Carolina to finish school, and I moved back to Nashville to continue my career. Four years later, Jeff proposed. We were hiking in Percy Warner Park in Nashville, and he completely caught me by surprise. When we reached a gorgeous overlook of the city and the surrounding hills, I turned around to find him on one knee.

Both of us immediately knew that we wanted to have the wedding in Jackson. It’s where we met and fell in love. We decided to have the ceremony and reception at the home of a family for whom I nannied for years. They are like family to us. We wanted to get married in the fall, so we selected a date when we thought the weather would be good and when the leaves would be in full color.

Jeff and I did all the planning ourselves. We chose to have our rehearsal dinner at The Granary because it is one of our favorite restaurants in Jackson. The views are phenomenal, and it has a rustic, laid-back feel. We took a group of seventy-two people down the Snake River on Friday, guided by our friends and accompanied by a bluegrass band. It was cold, but it was awesome! Saturday was still cold and overcast; however, when it was time for the rehearsal and dinner, the skies cleared, and it was gorgeous. On Sunday morning, we brought in a yoga instructor for the bridal party, which set the mood for the day. The rest of the day flew by! It was absolutely perfect weather, 72 degrees and sunny. We had an evening ceremony on the lawn by the pond. Afterward, our guests enjoyed cocktails and the bluegrass trio, Bog Dog. Our reception was held mostly inside the home, where the band was set up. Guests also mingled on the outdoor patios and kept warm by the outdoor fireplaces and fire pits. It was a cold evening, but our dance party kept everyone warm. It was truly a perfect fall wedding in the Tetons! 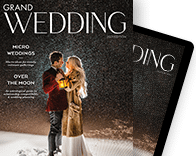