My parents met while my mom was working at The Merry Piglets Mexican Grill in Jackson. At the time, my dad owned property over the hill in Clawson (not Tetonia, if you ask him) and was building a house in between trips to Alaska where he worked on a fishing boat. Soon after, he and my mom moved to Seattle to be closer to my dad’s work and my mom’s sister. This is where I was born. When my parents moved back to Teton Valley, Idaho, they continued working on the house that shaped my upbringing, as I split my childhood between Alta, Wyoming, and Tetonia, Idaho, once they got divorced.

Jason was born in Texas, but he spent his early childhood in Hawaii. His family moved to Teton Valley when I was in the third grade and he was in fifth grade, living on Packsaddle Road in Tetonia. They moved a couple of times, but eventually landed in between Driggs and Victor where his parents live now.

Jason’s little sister Jacque was one of my best friends growing up. Upon meeting, we were immediately inseparable, spending nearly every weekend together. My dad would drop me (age 7 at the time) and my little sister off at Jacque’s house to play so that he could work. Jacque and I would run around together and leave my sister with Jason (age 8) to hunt for grasshoppers.

Jason and I both went to Teton High School; he was a senior when I was a sophomore. I attended college at the University of Wyoming, graduating with a degree in costume design. After college, I traveled on both the east and west coasts, as well as to Thailand and Greece. I’d come back to the valley whenever I needed a free place to stay and to earn money for my next adventure. Each time I returned, I realized I liked the place where I grew up more and more.

Jason and I remained friends while I was away and he was in Colorado working construction. Then, when we both moved back to Driggs, we hung out. He towed me out of snowbanks whenever I was stuck and brought pizza and beer over to my house after work. We spent weekends at the Royal Wolf in Driggs playing pool where he pretended to be my boyfriend whenever a creepy guy hit on me.

When we finally got together, someone asked Jacque how she felt about her brother and her best friend dating. “We all knew it was going to happen,” she replied. “It was more of a surprise to them.”

Fast forward several years to our wedding day. We both wanted a tiny wedding (I guess you could call it a “micro wedding”). We invited only our immediate family and their significant others and children and our good friend Emma Farnsworth and her mother, Rebecca, who is also a dear friend was our cake maker. Sixteen people attended our wedding in total, including Jason’s 5-year-old son Gavin, our 18-month-old son Landon, and our photographer Jamye Chrisman.

We wanted our ceremony to take place somewhere with a mountain view, because, after all, one of the best things about growing up in this area is the Teton Range. We chose the Wedding Tree near Kelly, Wyoming, because we loved how the trees framed the mountains, and we hoped to encounter some of the area’s abundant wildlife.

Jason and I planned a prearranged first look at Schwabacher Landing, along the east shore of the Snake River in Grand Teton National Park, to snap photos at the base of the mountains. But Mother Nature graced us with a total whiteout blizzard, thwarting our plans. We could barely see the car in front of us driving out there, let alone anything resembling a mountain. Well, the mountains never made their showing that day. Still, Jamye was able to capture another Teton icon—big, fluffy snowflakes. In fact, the photos came out so good that I didn’t even care about the weather, even though it was freezing!

My dress is one of my favorite parts about our wedding. With a long-sleeved design, I was able to layer two sets of long underwear underneath it without anyone even knowing. And this dress has a history, too. It was handmade—with a peplum at the back, satin covered buttons, pointed sleeves, and a sweetheart neckline—by my great-grandmother for my grandmother’s wedding day from silk satin my great-grandfather brought back from China. My grandma  and grandpa were married on June 17, 1950 and stayed together for 69 years. In the ’80s, my dad’s sister wore the dress again (unaltered) and is still happily married.

I was sure I’d have to make alterations to the dress, but amazingly it fit almost perfectly! The only modification I performed was one tiny dart in the center of the back to accommodate my shoulders, which aren’t quite as broad as my grandma’s. The only other repair made was to the hem. While making the alterations, I imagined myself following in her footsteps, as she taught me how to sew and bought me my first sewing machine.

Jason and I accomplished all of our wedding day goals with a January ceremony at the Wedding Tree. The snowstorm made for magical photos. And although the guest list was small, the amount of love and support we received could have filled an entire concert hall. After the ceremony, we retired to the Calico for an après celebration and cake cutting.

It sounds so cliché, but the fact that Jason and I were “just friends” for so long—long enough to know basically everything about each other—allowed us to establish a solid foundation for our marriage. Today, Jason’s son Gavin is the best big brother to our younger son, Landon, and I have three guys who I love with all my heart. We did things a little out of order, maybe, but it works for us and it’s pretty cool that Jason and I get to raise our family in the same valley where we grew up. 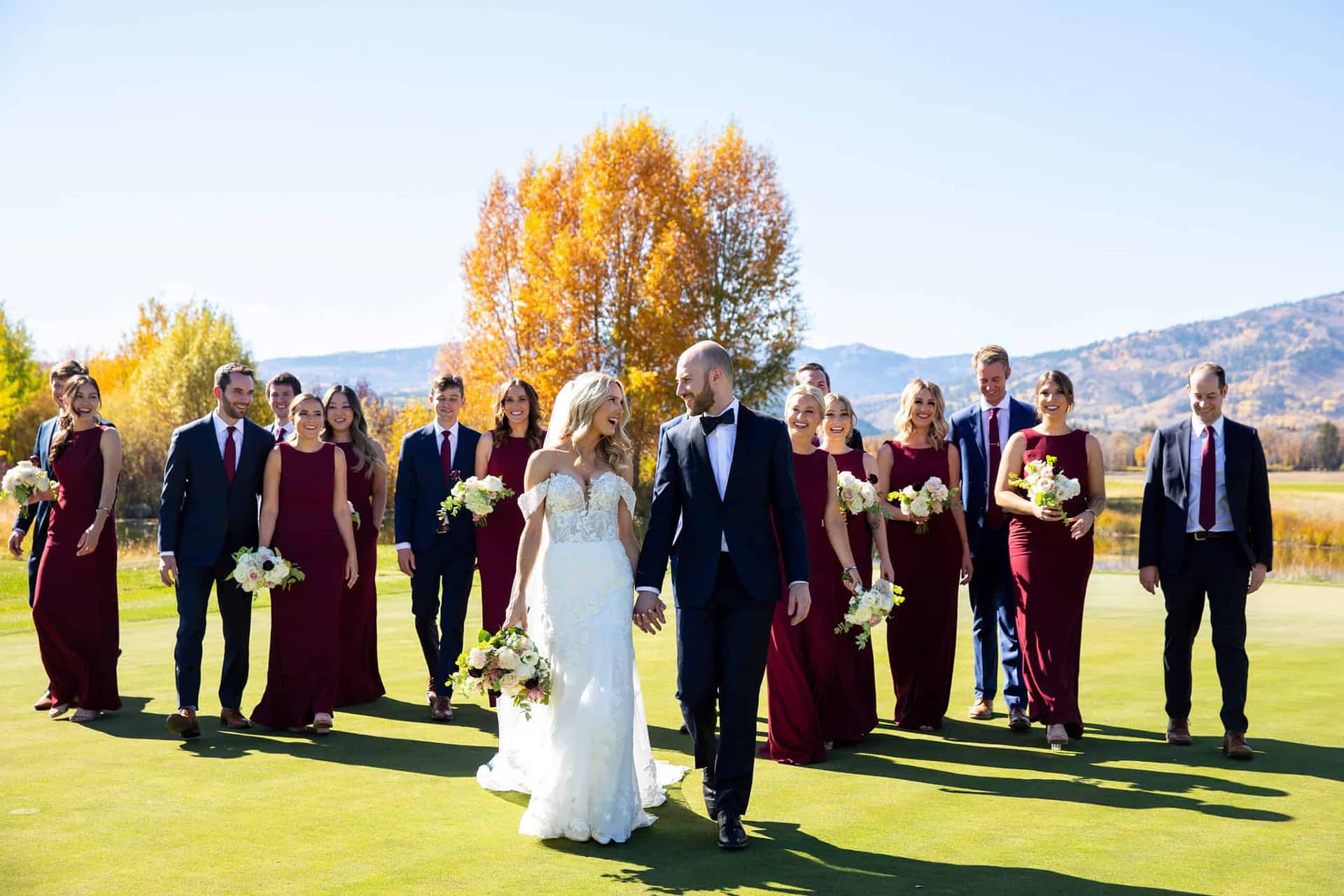 Love in the Name of Science 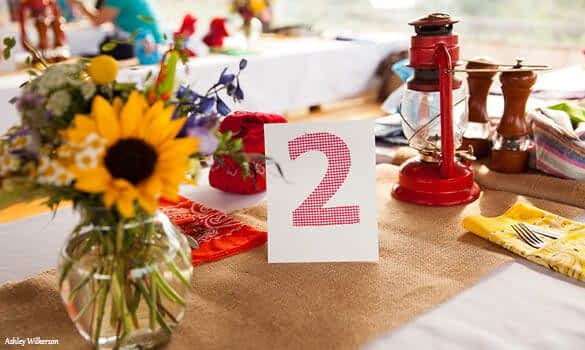 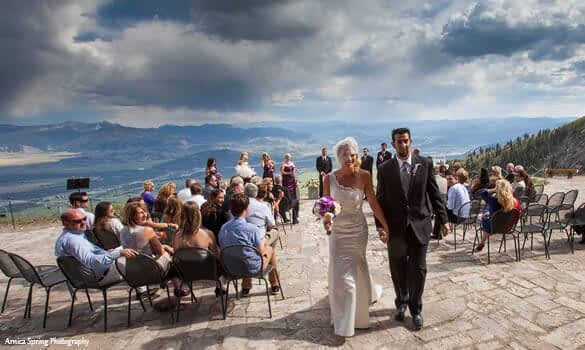 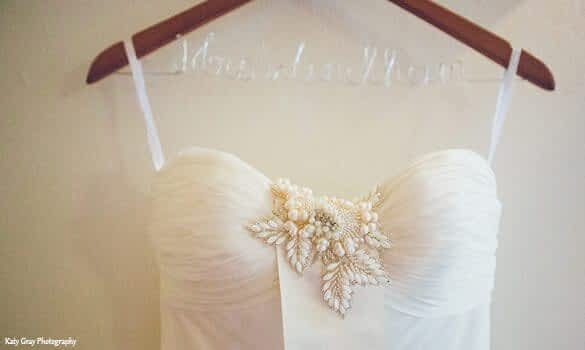