Our story begins in 2018 when Ricky and I decided to take a summer trip together after only dating for a couple of weeks. We live in Western Washington and Ricky had previously visited the Tetons. He was convinced I would fall in love with them. And of course, I did … with the mountains … with the locals … and, with him.

Ricky and I are both trail runners. To clarify, Ricky is an ultra-runner. You know, one of those crazy people who runs 30- or 50-plus miles at a time. I’m just a normal person and am content with a 10-mile jaunt.

So in the summer of 2019, we found ourselves back in the Tetons. This time, with an adventure on the itinerary. Ricky planned on running the Teton Crest Trail, 40 miles of rugged mountainous terrain. I, on the other hand, had a full day of shopping planned (or, so he thought).

The day began at 6 a.m. on August 31. I dropped Ricky off at the Phillips Bench Trailhead on Teton Pass where he began his run. Then, I drove into town, ordered a Mexican mocha from the Cowboy Coffee Co., and headed to the park. My “shopping plan” was actually a 20-mile run of my own, which started at String Lake and finished at Paintbrush Divide. It was a beautiful, sunny, 80-degree day, with clear skies. My goal was to complete my run within six hours and greet Ricky at String Lake after he finished his.

Well, I underestimated the trail (a rugged 10-mile climb to 10,700 feet). I stopped at Solitude Lake for a snack, before making my way down Cascade Canyon. Then, with 8 miles to go, all downhill, there he was. Ricky was 30 miles deep, coming up Cascade Canyon to Paintbrush Divide. I’ll never forget the look on his face—surprised, tired, and ready to be done. I just crossed Paintbrush Divide, so I knew what he had up ahead of him. When Ricky asked me to turn around and finish the trek with him, I agreed without hesitation. Together, we made our way through a glacier rock-covered trail, before summiting Paintbrush Divide to stop and take in the view. The afternoon haze was beginning to roll in, and the 360-degree vista of the range took our breath away. At 10,700 feet, Ricky got down on one knee and pulled a beautiful diamond ring from his running vest.

“We were meant to find each other … Will you marry me?” he asked.

In complete shock, I said “yes.”

Ricky’s original plan was to propose at String Lake, where he would be finishing his run. But after running into each other on the mountain, our rendezvous was destined. We completed our run, and celebrated with burgers at the Silver Dollar Bar.

The next morning, sore, and with a beautiful diamond ring on my finger, we stopped at the scenic Mormon Row barn to capture a few engagement photos. We decided then that this is where we would get married, with the Tetons in the background.

Before leaving town, I picked up a copy of Grand Wedding magazine and our destination wedding plans began. First, we wanted an adventure photographer who would capture our wedding day from every angle. This was an easy choice: Amy Galbraith. Next, we wanted an intimate dinner venue that would host 50 guests. The Wort Hotel made the perfect spot—great food, drinks, live music, and accommodations, all in one building.

Our wedding day arrived and it was perfect. Ricky wore a traditional, formal firefighter’s uniform, and I wore a beautiful white ball gown. We shared our first look at Mormon Row, and were accompanied by family and friends at Schwabacher Landing for our ceremony. We spent two hours in the park taking photos before driving into town to join our guests who were enjoying hors d’oeuvres and an open bar at The Wort.

After dinner, I changed into a second dress, a sexy low-cut lace number, and cowboy boots. And then there were the cakes—a chocolate cake with raspberry filling, and a vanilla cake, also with raspberry filling and decorated with replicas of our dogs (care of Absaroka Cake Company). We joined the locals at the Silver Dollar Bar after our reception, where we shared our first dance and celebrated the rest of the night boogying to live music on a spacious dance floor.

Looking back, we wouldn’t change a single thing. 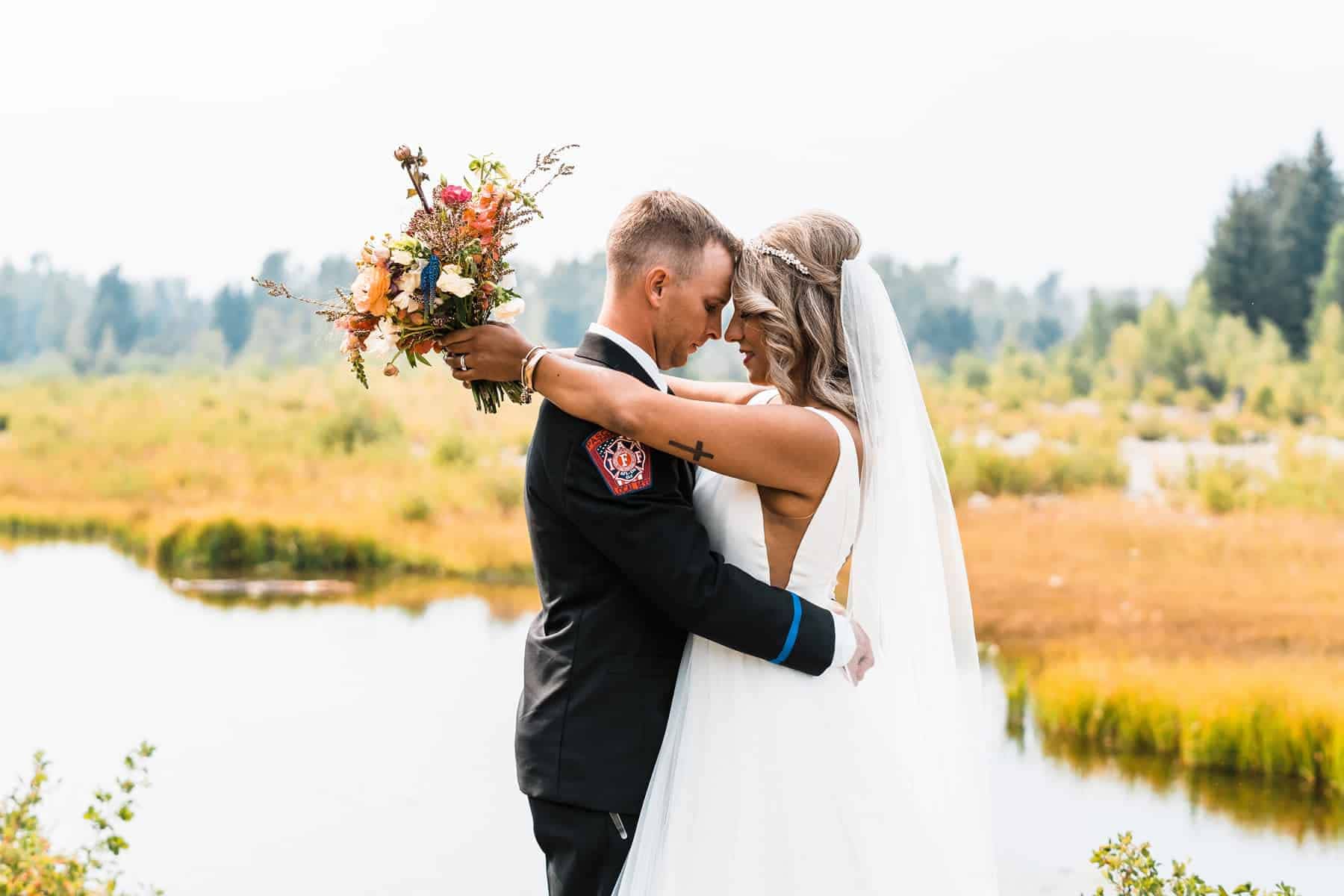 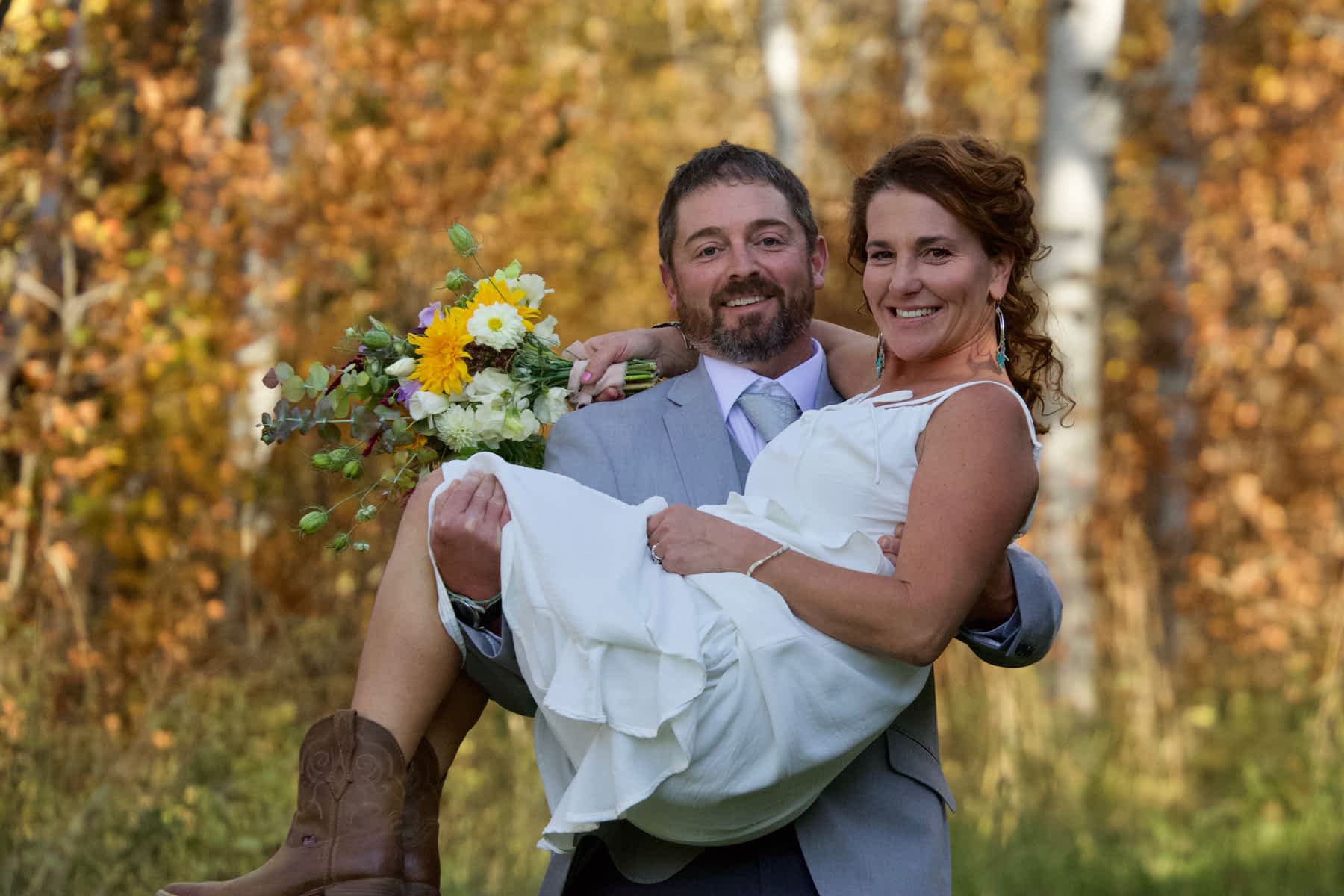